WHERE IS THE DRAGON?

Our young readers will love the humor, details and visual games in this warm book.  It celebrates the absurdity of kings, knights and dragons and invites  our children into the game.

WHERE IS THE DRAGON? 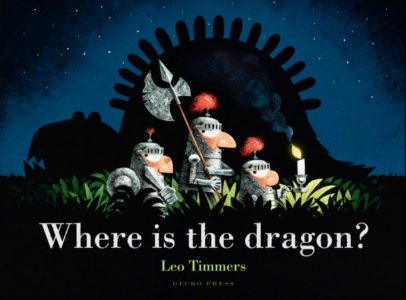 The king is having dreadful dragon nightmares.  He orders his three knights to go out into the dark night to save his realm.   So, off march the knights!

The knights with their armor, their huge noses protruding from feathered helmets, some dangerous-looking metal weapons, and a single candle to light their way, are willing, if not eager, to obey. But they are operating under a severe disadvantage. They’ve never seen a dragon, and the king has only given them a few vague ideas about what the creatures might possibly look like.  The knights aren’t without fear, particularly Knights One and Two, as they trek through the dark forest.

“Knight One whispers to Knight Two,
I’ve never seen a dragon, have you?”

The knights take turns recounting the king’s descriptions and searching the shadowy night. According to the king, dragons have thick, double-sided spikes. But wait!  There is a dark shadow out there that looks just like that!

With a candle to light the scene, they see a harmless bunch of long-eared rabbits sitting in a pile of carrots. And so it goes.

All of the shadowy shapes fit the various descriptions suggested by the king, but each one, when lit, is something entirely benign and delightfully silly. 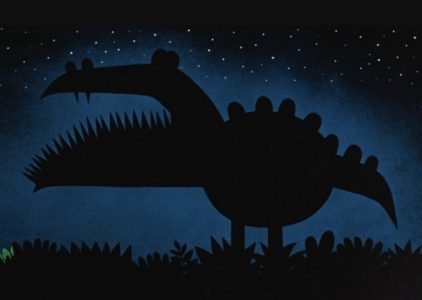 “…their teeth aren’t used for veg and fruit!” 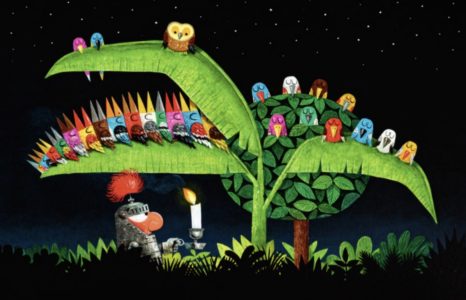 But then…..the final shape, dismissed by the knights, just might be the real thing!   Just after the knights (well, most of them) have convinced themselves that there’s “no dragon taking wing” in the forest, and the king is safe, our young readers are met with a surprise! After falling into the water, two of the knights are ready to turn back.

What do you imagine a dragon might look like?
Draw a dragon and add your own ideas. 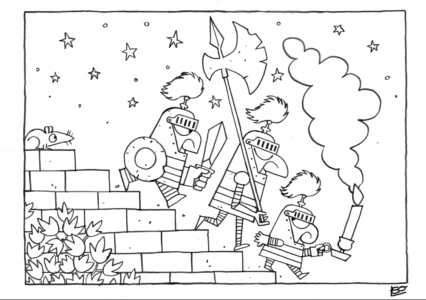